The reasons you should NOT get a Bahnhof Dobermann: 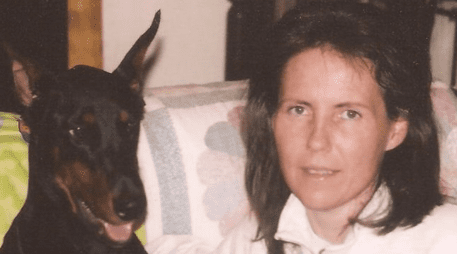 More on the reasons you should NOT get a Bahnhof Dobermann.

Please do not take my word on this. Do your own research.

For your own education, go to any website that shows Iditarod dogs and then go to show line northern breed websites and see if you see any intersection here. Do the same for all of the above kinds of working dogs. You will find that real working people NEVER go to conformation rings to find their dogs. It's just a fact of life. I guarantee it.

For additional information on this topic, take a look at Coppinger and Coppinger's work on just this topic. They are biologists who train sled dogs as a hobby and have written a book about the development of working dogs.

Why would a working Doberman breeder do any differently than all of the other working dog breeders known to mankind?

When breeding for capricious, superficial, aesthetic characteristics in a dog, obvious damage can occur. For example, I once heard a well-known show handler to say that the show Doberman's long, elegant neck absorbs shock when he goes in on a long bite such as a Schutzhund courage test.

My thoughts were, "Humm, perhaps football players should be selected for long, elegant, supermodel necks too? And, surprisingly, German Shepherd, Rottweiler, and Malinois breeders do not breed for long necks when their dogs do protection sports? What an absurd justification for a ridiculous aesthetic trait in a show dog."

Clearly, when one's function is to run really fast into someone with one's open mouth, a short muscular neck would be beneficial.

In addition to such obviously detrimental effects of breeding for appearance, behavior and morphology are linked. Do NOT take my word for this. Do your research. Read books, such as Temple Grandin's Animals in Translation.

In Temple Grandin's book, pay particular attention to pages 128, 148 - 149, and 236 -240, where she concludes that appearance and temperament are inextricably, genetically CONNECTED.

If you want a show dog, buy a show dog.
There is nothing "total" about Bahnhof Dobermanns.

I prefer to NEVER sell a dog to a Schutzhund person because it is so much better for the puppy to be in a loving home where he is expected to be member of the family and to protect his family as all of his natural drives push him to do.

After reading the above, if you don't agree with what I do or want one of my dogs, that's OK.

Get a dog somewhere else.

If you are still interested in a Bahnhof Doberman, let me tell you about them.

I have my dogs for companionship and personal protection. In the past, I have participated in Schutzhund because I think my dogs enjoy it and it builds the natural bond between my dog and me. Earlier I stated that I think the sport puts unrealistic expectations on the handler that causes harm to the relationship between the dog and the handler. This is because the handler begins to worry about winning more than training the dog.

If you train your dog because you like to train your dog, the sport can be beneficial. If you train your dog for reasons of prestige and ego (or even worse, trying to make money), then you will begin to pressure yourself and the dog too much. If you are new, your lack of skill will make the situation even worse. If the people you train with focus on winning and don't understand nuances of behavior, it is a very bad situation for you and your dog. Thus, sport work can be very gratifying and build the bond between you and your dog, or it can be costly, frustrating, and destroy the bond between you and your dog. Unfortunately, to me, it seems that the latter is more common than the former.

My dogs live in the house with me. They are loose and running around when people visit. Have you ever watched the movie In the Line of Fire with Clint Eastwood and John Malkovich? A woman allows John Malkovich's character, Mitch Leary, into her home while her German Shepherd protection dog is tied in the kitchen, apparently too aggressive to be loose when a stranger enters the home.

What good is that? Not much, as is evidenced by the police finding the woman's cut up body (and the body of her roommate) strewn about their living room, all the while her protection dog barks and lunges at them, still tied up in the kitchen. A protection dog is no good if you can't have it out and about with you.

My dogs are stable enough to live with me, yet protective enough to do their jobs. They are large and beautiful, although I do not breed for either of those characteristics. Their scenting ability is outstanding. They love to work for you, and thus, if you do obedience with them, it is like dancing because they are so graceful and intent. Their protective instincts are outstanding. However, because the protective instincts are so pronounced, I must be responsible enough to SOCIALIZE and TRAIN my dogs. Additionally, I must be an intelligent leader, not a ogre whom they fear, or they won't trust me. If they don't trust me, bad things can happen. These dogs are exactly what I want.

They may NOT be exactly what you want. That is OK. If you want something else, go somewhere else to get it. 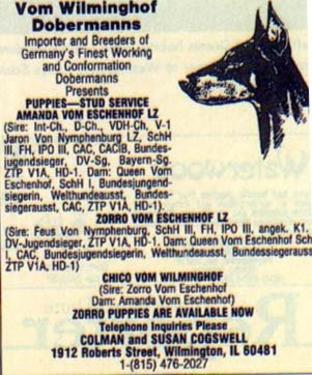 Deja Vu was the foundation bitch of Bahnhof Dobermanns. She was out of Zorro vom Eschenhof and Amanda vom Eschenhof, both German-bred and imported by Colman Cogswell of Wilminghof Dobermanns. Colman worked for the railroad and to acknowledge his dedication to the breed, I named my kennel "Bahnhof," which is German for Railroad Station.