https://press.uchicago.edu/ucp/books/book/chicago/G/bo3638859.htmlI have found that if I want to stir up angst, I can advocate for the benefits of linebreeding and inbreeding. In some ways, I completely agree that these practices can lead to the downfall of a breed. When a breeder inbreeds for superficial, fanciful, visually appealing morphological or behavioral traits, very bad things can happen. Temple Grandin (2005, pp. 81- 86) discusses such practices in her book, Animals in Translation. For example, Grandin discusses how selection of physical traits affects emotionality, behavior, and even cognitive ability in dogs. She illustrates her message by offering many examples from many species.

Specifically, in dogs, Grandin cites Rough Collie breeders selecting for "needle-nosed" specimens, with linear heads that leave much less room for a brain. Such breeding practices focusing on an unnatural, visually appealing trait, she maintains, helps explain the reduction in intelligence in highly selected show line collies that are bred for conformation. To be good herding dogs, collies must be able to think and process information. At herding trials, overwhelmingly Border Collies, not Rough Collies with their tiny skulls, prevail. Border Collies are much more likely to be bred to work regardless of their appearance. Furthermore, Grandin describes how people who spend lots of money on beautiful show dogs are much more likely to tolerate unacceptable behaviors, and thus, poorer quality dogs regarding behavioral traits, continue to be selected for breeding in conformation-focused breeding programs. Grandin (237) states in no uncertain terms, "Temperament and appearance are connected," (her italics)! When we breed for appearance, we affect temperament, often very detrimentally.

One thing that working dog breeders have noticed for years is that to maintain working behaviors, one must breed for such behaviors. Show (conformation) dog breeders express contempt for such thought. Again, Temple Grandin (2005, pp. 80 - 81) demonstrates how selecting for one trait, even unconsciously, can lead to a change in an entire gene pool. Grandin is an agricultural engineer, and thus, she sees many species in many settings. She noticed that pigs from the same genetic line in one location were behaviorally very different from pigs from the very same genetic line at another location. At one location, they were hyperactive and nervous and at the other location, they were calm. After investigation, she found the culprit to be the needle on the scales used to evaluate the breed-worthiness of the pigs. At the one location, the scale was stable and a pig that moved about could easily be evaluated. Thus, hyperactive pigs continued to be used in the breeding program at that location. At the other location, the needle on the scale was "jumpy" and hyperactive pigs could not be evaluated properly, which resulted in their being eliminated from the breeding program at the second location. Thus, only calm pigs were selected for breeding. This inadvertent selection changed the entire evolution of the pig population at this second location.

I have noticed when I go to conformation shows, I see Dobermans in the conformation ring that are determined to be "alert" by current judging practices and are thus deemed "champion" material. In my opinion these "alert dogs" are exhibiting behavioral traits that I evaluate as being "nervous at best" and "paranoid" at worst. I see these dogs looking about, ears erect, heads frantically whipping from side-to-side as though gunfire had broken out, prancing and strutting when there is NOTHING going on. There are no assailants nearby, yet the dogs in the ring act as if danger is lurking everywhere. This inadvertent selection for "alertness," in my opinion, is one of the problems we have with Dobermans bred for conformation. They are desperately alert when there is no need to be. Grandin (p. 128) expresses a similar concern when she cites Springer spaniel breeders selecting for "alertness" and ending up with "Springer rage," a form of epilepsy due to the selection of dogs that are doing just as I described above. Why would we select for such dogs? Because they appear to be "alert" in photographs and on video tapes? Yet in the real world, they are too concerned with irrelevant stimuli to do any real work.

In summary, I agree that when one inbreeds for whimsical traits, bad things happen. However, I adamantly believe that if one inbreeds intelligently for working traits, good things happen. Scott and Fuller (1965, p. 386 - 387), in Genetics and the Social Behavior of the Dog: The Classic Study, documented that a wide range of behavioral and physical variation exists within breeds. They explained, "This means that the practical breeder can usually effect major change in a breed by means of a selection program. Whether or not he will be successful in achieving the changes he desires will depend upon the nature of his objectives and the details of his breeding program."

Scott and Fuller (p. 387) further warned, "The definition of a type has some value in the show ring, because it gives judges an objective basis for scoring a competitive event, but it should be recognized as an abstraction. A breed is not defined by conformity to type, but by common ancestry and absence of outbreeding. If conformity to type is established as the goal of a selective breeding program, certain difficulties are bound to appear because of the complexity of genetic determination of the many traits which enter in to a type definition."

When advising on breeding working dogs, Scott and Fuller (p. 394) advise selection for "multiple criteria, including behavior, fertility, vigor, and special attributes of size and strength." They noted that a maintenance of rearing and training considerations are at least as important as heredity in working dogs and that a good selection program would first result in rapid changes in emotional reactions. They conclude, "... the breeder should combine selection with occasional outcrosses in order to bring new combinations, repeating those matings which appear most successful. A large number of animals must be available to compensate for waste from unsuccessful breedings. " In this sentence, I define their term "selection" as meaning linebreeding or inbreeding, due to their later use of the phrase "occasional outcrosses."

I had the fortunate experience of hearing Dr. Padgett speak at a United Doberman Club (UDC) National event in Bowling Green Kentucky in the 1990's, just before I left that organization due to disillusionment with its focus on the "total" Doberman. Being one of the only two openly inbreeding Doberman breeders going to Dr. Padgett's presentation, the other being Shelley Shea of Rosenhof Dobermans, I expected to have to endure long and critical castigation from other breeders after his lecture. Thus, I was sure to have a front row seat, so that I could hear and digest every word that he uttered. Shelly and I were nervous, believing we would be targeted after his talk, as we took our seats in the front row knowing how other breeders of the day downgraded us for our open practice of inbreeding on the Eschenhof-Nymphenburg lines.

Dr. Padgett opened his seminar by asking something to the effect of, "How many in here have bred their Dobermans and had a Golden retriever puppy in the subsequent litter?"

There was nervous giggling in the audience and denials of any such atrocity ever occurring in their litters.

He replied, "Exactly. That would never happen. Why? Because you have a limited gene pool that excludes Golden Retriever characteristics from occurring in your litters. Thus, ALL of you, if you breed purebred Dobermans, linebreed to some extent."

The room was hushed.

He further discussed how it is not wise to throw dogs out of the gene pool that have a single genetic disease or else the gene pool becomes too small too quickly. He used the example of humans with nearsightedness. If we threw out all humans with that genetic defect, there would be few humans to carry on the species, and those left standing might have even worse genetic diseases that we haven't even identified yet. He cautioned throwing out all dogs from the gene pool that had issues that are not that critical at this time.

He advocated selecting one genetic disease for removal from the gene pool. He stated that the "worst genetic disease" should be eliminated first. Then once it is gone, work on the other diseases one at a time, always selecting the worst disease at the time on which to focus. Thus, this idea of testing dogs for every known issue and then eliminating all dogs that have any genetic defect is not a good idea, especially, if we want to retain any other kinds of traits, such as working ability. Unfortunately, this advice appeared to fall on deaf ears that evening, because there became intense pressure to select for all health issues, until there were no dogs left to breed. Ironically, some of those most focused on genetic disease would advertise their dogs for years and years with tests, such as OFA, as "pending." How could an OFA pend for years, when results come back in a few weeks? It was obvious that politics were at work, and not true concern for health-related problems.

Dr. Padgett did not discuss the concern of the efficacy of the available health tests at the time, some of which were (and still are) suspect. Interestingly, true working dog breeders, that is breeders who breed dogs to hunt and herd and never while never, ever going into a conformation ring, rarely if ever do health testing. They look at the working ability of the dogs and if the dogs have a long-lived working career, their progeny continue to be bred.

For example, I have had three working line Rhodesian Ridgebacks, one that my parents had when I was born in 1960 and two that I purchased in the 2000's. They are amazingly athletic and courageous. Many people at local training events who see them ask me where I found them because they have never seen such athletic and calm Rhodesians. Questions come from Doberman, Malinois, and German Shepherd people who compete in AKC events like agility. These people have seen typical conformation bred Rhodesian Ridgebacks and they tell me that mine are qualitatively different in that they appear to be so much more muscular and even tempered. I explain that my Ridgebacks are exclusively hunting line dogs with no conformation breeding known in them for generations.

My one criterion for the Ridgebacks that I purchased was: Iif a mountain lion or black bear jumps out of the woods near me, I want my Ridgebacks to protect me. They have, without hesitation, chased such large animals away from me on several occasions. Amazingly, contrary to everything I have heard from many working dog enthusiasts (who think of "dumb hounds that are not obedient"), they turn on a dime and return to me when I call them.

Do you know how many health tests I asked about when I purchased my Ridgebacks?
None.

Do you know how many health tests their parents and ancestors as far as the pedigree can be seen have had performed?
None.

Why? Because the working Ridgeback breeders don't care and neither do I. Performance is the standard. More importantly, do you know how often any of these dogs were lame, had skin problems, or had cancer, which are their top genetic diseases? Never. Old Burger lived to be SIXTEEN YEARS OLD. If you breed for performance, all else follows. Health follows. Beauty follows. Temperament follows. Such breeding, for performance, is how domestic dogs were created and that is how healthy, functional domestic dogs will be maintained.

This is why, at Bahnhof Dobermans, the focus is on function. 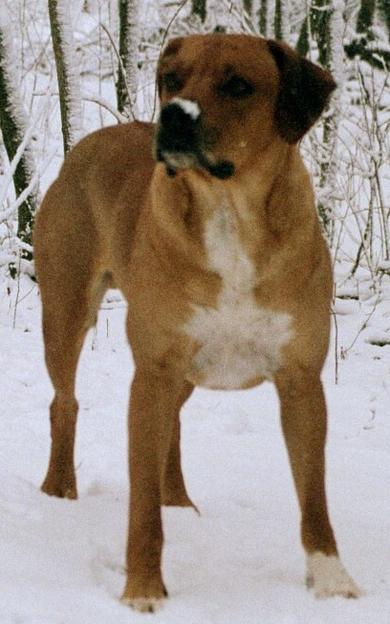 Athleticism follows: "Yaro". Yaro was the product of a brother-sister inbreeding. 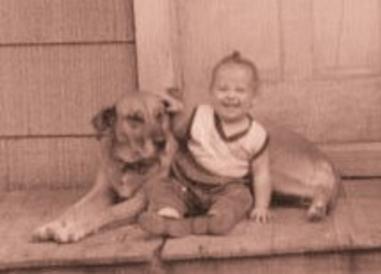 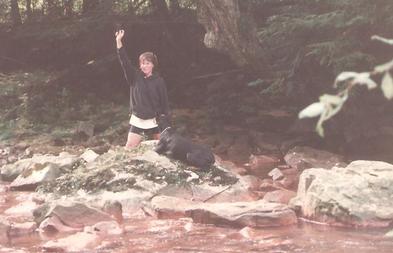 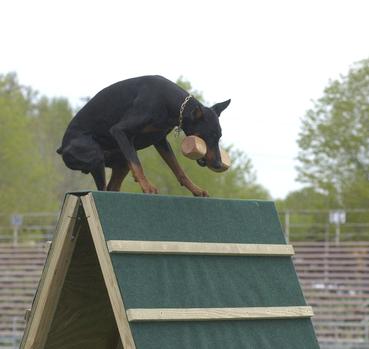 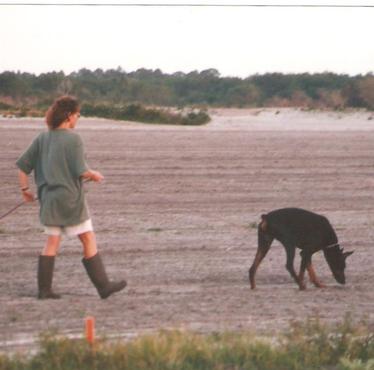 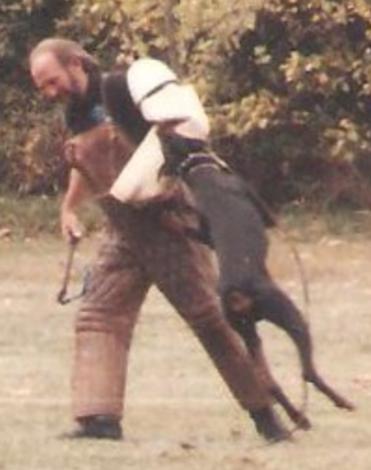 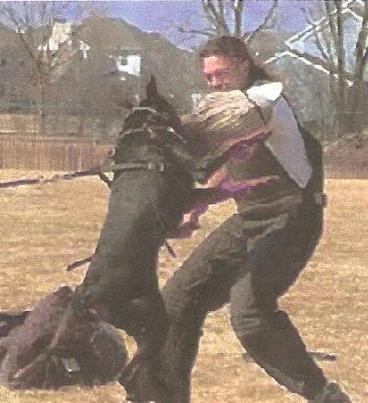 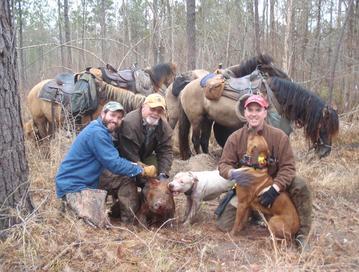 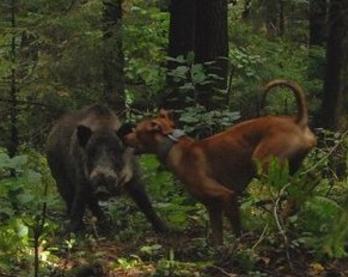 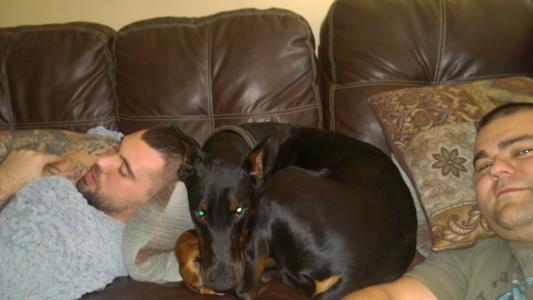 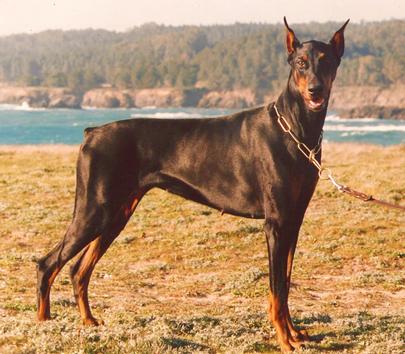 A photograph of the ultimate test of health. 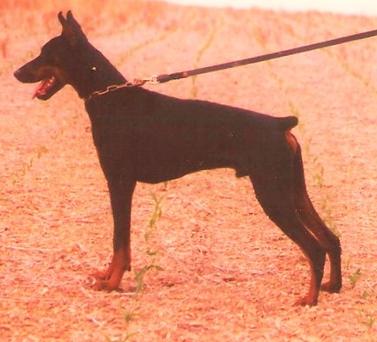 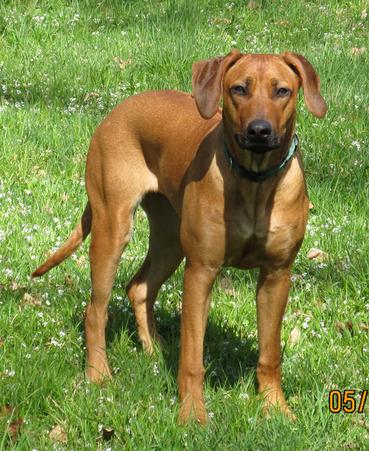 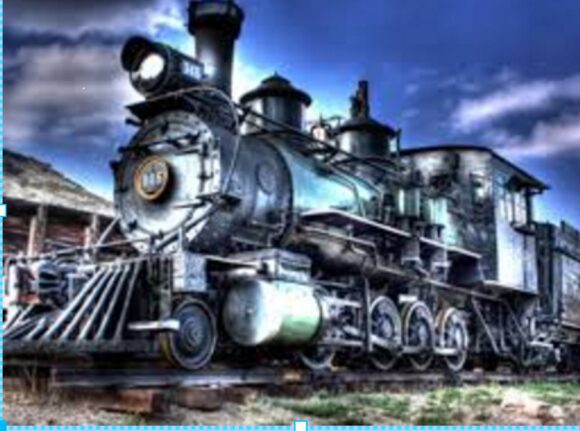 Several References are available regarding the effectiveness and practices of linebreeding and inbreeding:

by Guy Gregory Ormiston, who breeds hunting and livestock dogs:

Control of Canine Genetic Diseases (1998) by George A. Padgett, DVM: